Saul Zaik is well known architect that’s famous for his Pacific Northwest take on mid-century modern design. He’s been practicing architecture since 1952 and I was lucky enough to photograph a Jessica Helgerson Interior Design remodel of one of his houses in the West Hills of Portland, OR.

For a different take on my typical blog post, I thought I’d do a play by play of each shot I took throughout the day and describe what it takes to pull off a typical one day interior design shoot.

1st Shot – South Elevation
Since my client’s needs were more interior design related, we only took one main exterior shot that showed off the work they did. This angle shows the new home color, new deck, and patio furniture. I debated long and hard about shooting this angle at this time of day. The house is in the shade and typically you want sun on a building. But because of the surrounding trees, the house wouldn’t be in full sun until mid-day and that light would be really bad this time of year (shot mid summer). Late afternoon wouldn’t have worked either because the shadow lines would have created a lot more distracting angles on the architecture.

This was a quick pickup that we went for since the light was looking good. Setup was pretty fast as we were all set from the previous shot. Exteriors go quick. The first two shots were done in about 30 minutes.

Though I love the look of mid-century modern, it’s typically a challenge to shoot the interiors. In this house, the wood walls and wood ceiling suck up a lot of light. In order to create the beautiful natural light look, I opened up 2 stops over the ambient light reading. This totally blow out the window frames, so I had my assistant walk around with a solid white reflector on the outside of the windows to cut the light at the window frames. This gave me some darker window frames to work with I photoshopped all the frames together for natural look and then used a separate outside exposure for the view. All told, I used 11 frames in the final composite. This shot took about an hour start to finish and about two hours in post.

This was a simpler shot lighting wise, but the styling took a little longer. Jessica and her designers totally rearranged the bookshelf to create a balanced look. One tip when moving homeowners stuff: Always take a before picture so you know where things go back. This shot took about 45 minutes

This shot went pretty quick. I used available light and added a little fill from a strobe bounced off a white card on the right side of the frame to open up the dining room table and chairs. I always use fill light in interiors; meaning my light is under the main ambient exposure by a stop or two. This opens up the shadows, while not becoming the dominant light source. There’s nothing more unnatural looking than an overpowered strobe in an interior. We knocked this one out in about 30 minutes.

The kitchen area serves as a pass though from the dining room to the family room and bedrooms, which made it hard to find a good angle to shoot it from. We ended up at this spot because it best showed the height of the space and how it related to the dining room. I shot separate exposures for the open door and upper windows and dropped them in later. This shot went quick, maybe 3o minutes. After this shot, we took a lunch break for about 30 minutes. Don’t want to waste too much time when there’s more to shoot!

I put these up together since we shot them back to back over about an hour period. We shot two angles because one just didn’t explain this cool space well enough. The first is more of vignette and the second is more the room hero. I love both these shots. They feel so peaceful. Pillows and plants take a long time to style to look right. Fortunately, shooting live view speeds up the process because you can see changes in real time.

The hardest part of this shot was that my camera and tripod were being reflected right in the middle of the shower’s glass wall. In post, I went in cloned out the reflection which was a little tricky with all that tile work. It was one of the those shots were post took more time than shooting it. This shot was all natural light. All in all, about 3o minutes to shoot and an hour of post.

We liked this composition to show off the design elements, but a couple of the clocks on the wall were out of the frame. We wanted to show all the clocks together as a group, but didn’t want to put any new holes in the walls. To make it quick and easy, Jessica and her designers hand held two of the clocks in place and I shot them standing in the middle of the room. I then photoshopped them out with a blank base frame. This is one of those times where it was faster (and less destructive) to do it in Photoshop than in reality. I used a fill light on the left because the room was so much darker than the bright bathroom. About 30 minutes total on this shot.

Not too much went into this shot. Mainly retouched out some oil stains on the concrete. Sweet car, huh? 15 minutes start to finish.

This is one my favorite office shots. Mainly, because it’s the office of amazingly talented photographer Ty Milford. It’s fun to see another shooters workspace and what they put up for inspiration. The room was shot available light, but I put a strobe in the hallway to brighten that up. 3o Minutes on this one.

Small spaces are tricky to shoot. I don’t like to go too wide which distorts everything and looks weird to me. So, I usually get back as far as possible, sometimes with camera pressed up against a wall and shoot just wide enough to get the key elements in place. We didn’t do too much styling on this. Mainly, just tidied up and moved away some clutter. We spent about 3o minutes on this one.

On this shot, we all went back and forth about having the sconces on or not. The sconces were the only real light source and turning them off made it really dark. The only daylight was coming from down the hall and around the corner. When they were on, the sconces were distracting because your eyes went right to them and overpowered everything else. Ultimately, we ended up going with them off and shooting a long exposure (8 secs, f/13, iso 320) to create a brightness that wasn’t there in reality. To the human eye it looked dark, but with a camera you can see a lot more. Quick shot though, maybe 20 minutes.

Fairly simple styling on this shot. It mostly required some photoshop since the tub area was in shade and that blew out the view and the cool roof detail. I never shoot HDR for this kind of work because you have so much more control if you shoot separate exposures work in layers. HDR gives you a little too much information and can kill a natural look. We took about 20 minutes to shoot this and I did not jump in the hot tub, despite it being so inviting. Still had another shot to do 😉

16th Shot – Master Bedroom from the Outside

Here’s another shot that I had to deal with reflections. I placed the camera and tripod on the center point of  the door frame, so all I had to photoshop out was one leg being reflected. I had almost wrapped this shot when I went back to review and realized I was standing in reflection of the glass. So, I had to shoot all the brackets once more, but fortunately hadn’t moved the tripod.

And that’s a wrap. The day started 8:30am and we finished up at 6pm. This shoot was pretty typical for an interior design / residential architecture kind of shoot that I do. We were able to get through so many shots because Jessica and her team are awesome at styling and know what they want. We’ve also been working together for over 8 years and have a good rapport. Most of my successful shots come from collaborating and great styling, whether by the client or an professional interior stylist.

Feel free to ask me any questions in the comments below. 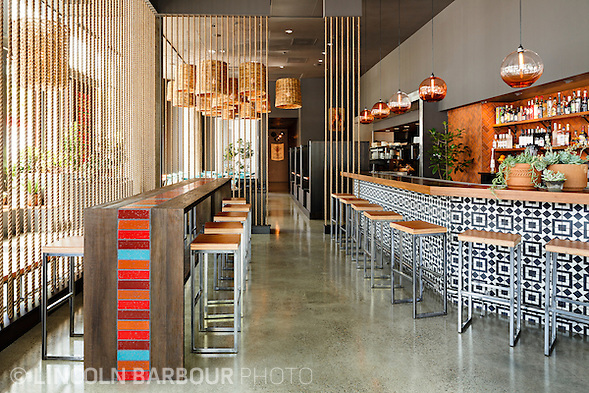 A recent restaurant project I photographed for Jessica Helgerson Interior Design was featured on DesignSponge today. Nice little write up, too. To see the full gallery, visit my archive site.

I take a lot of pride in my Photoshop retouching skills. Mainly because I try really hard to make my shots not look like they’ve been retouched.

For architectural interior shots like this cover image for Oregon Home, I often do something I call, “Dropping in the Windows.” During the shoot, I’ll take several brackets that are under my main exposure. Later on in Photoshop, I will pick a darker exposure that I like the look out the windows and overlay it on the main exposure. I then hand cut out the windows using a mask and blend it together a little with the paintbrush. It’s subtle, time consuming, but the look can’t be beat.

The alternative to this is to do and HDR photograph or overlight the room with artificial light. I, personally, never like either of those ways look, so that’s why I do it the hard way.

Here’s time-lapse of the whole process:

END_OF_DOCUMENT_TOKEN_TO_BE_REPLACED

The newest architecture and design magazine to highlight the Pacific Northwest has certainly been generating a lot of buzz. Almost all my clients asked me about GRAY Magazine as soon as it hit their desks. And I can see why. It’s a really well designed magazine that is photo heavy with great articles. It’s also printed on really nice paper for that high end feel.

GRAY is up to issue #3, but I was pretty stoked to have this project I photographed for Jessica Helgerson Interior Design run as the cover story for their second issue. The rest of the tearsheets are below, but if you want to see the photographs on their own, check out the White Brick Mediterranean Home gallery on my archive.

Just found out one of my clients, Mahlum Architects, has won six design awards for their Springfield Elementary Schools project that I photographed for them this summer. The awards are…

And here are the shots that helped win all those awards.